June 21: The Fourth Sunday after Pentecost 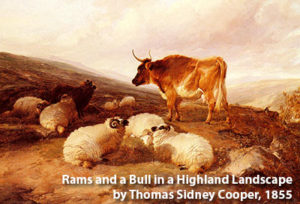 Therefore he is the mediator of a new covenant, so that those who are called may receive the promised eternal inheritance, since a death has occurred that redeems them from the transgressions committed under the first covenant. For where a will is involved, the death of the one who made it must be established. For a will takes effect only at death, since it is not in force as long as the one who made it is alive. Therefore not even the first covenant was inaugurated without blood. For when every commandment of the law had been declared by Moses to all the people, he took the blood of calves and goats, with water and scarlet wool and hyssop, and sprinkled both the book itself and all the people, saying, “This is the blood of the covenant that God commanded for you.” And in the same way he sprinkled with the blood both the tent and all the vessels used in worship. Indeed, under the law almost everything is purified with blood, and without the shedding of blood there is no forgiveness of sins. –Hebrews 9:15-22

If you’ve been around me very long you’ve probably heard the story I tell of my childhood friend whose father was a butcher. He actually had a butcher shop separate from any other stores. I loved going in there because he smoked meats and the place smelled wonderful. There were fairly strict rules about going behind the door that was behind the counter, so I didn’t get to go back there for a long time. I was very curious about what I pictured in my mind: big saws that meticulously cut meat at whatever angle or curve the butcher wanted. Sure enough, when I finally got to see it, that’s exactly what was back there.

I also noticed that when the butcher went out front to see customers, he wore a particular apron, but as soon as he went to the back, he put on another one and vice versa. I inquired about this consistent practice and he told me plainly, “The customers don’t want to see any blood. The one I use in the back is blood-soaked, so I keep a perfectly white one for behind the counter.” As I watched him in the back I was a little shocked at how much blood there was. It was amazing really. I can still feel that moment of revelation I had of how the front was a kind of theater to pretend that what was common and real actually wasn’t.

When contemporary people read passages like the one I copied above from Hebrews 9, I don’t think today’s society helps us much. It is true that so much human blood was spilled in the 20th century through war, terrorism, and torture that we find it repugnant. Is the idea that there can be no pardon without bloodshed barbaric? Many think so.

I tend to think that, like the butcher’s two aprons, the only thing that has changed is that we make better theater of it. How much blood is there involved in abortion that we never see? How about land mines or policies that lead to fatherless neighborhoods that inevitably turn violent? I doubt we’re any less primitive than when Hebrews was written, and I don’t think the theater of it all is a good thing.

But back to the passage: you have the contrast of the blood of animals and the blood of Jesus. The blood of animals copies or shadows in very imperfect ways what blood atonement is about. We find that at the heart of the sacrificial system is the self-giving love of God himself. Let there be no mistake: the new covenant spoken of in chapter 8 and extended into chapters 9 and 10 tells us that Jesus’ blood is what enacts this New Covenant. Specific to this chapter is that the covenant can only come into force on the death of the person who made it.

That is remarkable information! The last sentence is a famous line within Christianity. Without the shedding of blood there is no forgiveness of sins. It sets forth a general principle that whenever any pardoning needed to be done, there had to be bloodshed. And now we have to see that the self-giving love of God required His only Son to be broken and spilled out in order for us to be received covenantally and personally into His grace. And that’s the gospel.