December 10: The Second Sunday of Advent 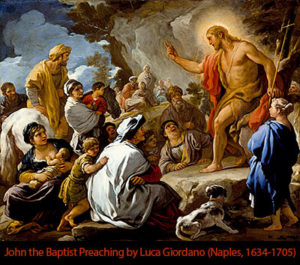 The beginning of the gospel of Jesus Christ, the Son of God. As it is written in Isaiah the prophet, “Behold, I send my messenger before your face, who will prepare your way, the voice of one crying in the wilderness: ‘Prepare the way of the Lord, make his paths straight,’” John appeared, baptizing in the wilderness and proclaiming a baptism of repentance for the forgiveness of sins. And all the country of Judea and all Jerusalem were going out to him and were being baptized by him in the river Jordan, confessing their sins. Now John was clothed with camel’s hair and wore a leather belt around his waist and ate locusts and wild honey. And he preached, saying, “After me comes he who is mightier than I, the strap of whose sandals I am not worthy to stoop down and untie. I have baptized you with water, but he will baptize you with the Holy Spirit.” – Mark 1:1-8

This is the second week of Advent this church year, and the lectionary reading is the passage copied above. Mark’s first line of his Gospel book is, “The beginning of the gospel of Jesus Christ, the Son of God.” Here he is telling us exactly what to expect: the joyful proclamation of the victory of King Jesus. God has delivered His Messiah, promised from so long ago, and now He is making all things new.

Mark moves immediately into the news about John the Baptizer. There’s not room here to expose it, but Mark quotes John, which is an amalgam of quotes from Isaiah and Malachi, all with an eye toward Exodus. This guy knows the scriptures! John is definitely known for being a baptizer. The Greek word for “baptism” (contrary to popular lore that it means “to immerse”) was used to refer to ceremonial cleansing and washings. Mark himself uses the word in 7:4 for washing dishes, just as the writer of Hebrews uses it for the ceremonial sprinklings of the Mosaic law (Heb. 9:10). We know that the meaning of John’s baptism has ceremonial significance because he was not in a very advantageous place to do it. It was out in the wilderness region of the Jordan at the far eastern boundary of the Land of Israel. Surely Jerusalem was a far more target-rich environment!

The reason “all the country of Judea and all Jerusalem were going out to him” (an inconvenient trip) at the Jordan River is fascinating. For some background, we must keep in mind that the Apostle Paul refers to the crossing of the Red Sea as a baptism (1 Cor. 10:1-2). Remember when the Israelites entered the Land from the wilderness, they crossed the Jordan River on dry land just like at the Red Sea. It is here that they were circumcised (Josh. 5), which Paul associates with baptism (Col. 2:11-13). And then in Deut. 2 they crossed over the brook Zered, the water crossing between two points. This was a symbolic transition between the condemned generation of the Israelites and the new generation who entered the Promised Land.

When these three water “crossings” are put together, they show that there is a water boundary between the old and the new, the cursed-for-sin and the blessed-with-forgiveness. Moreover, we even see this in the layout of the Tabernacle/Temple with the laver of cleaning or “bronze ocean” (1 Kings 7:23ff) in order to enter God’s presence. This was, of course, a shadow of the Heavenly Throne Room where the throne itself is separated by the glassy sea (Rev. 4:6). In other words, passing through water means moving toward God in His holiness and requires repentance and cleansing to move from the old to the new.

Before the baptism of John they were living in the world of sin and rebellion against God. It was time to turn around and go the right way. When they emerged, it was to look for the one who would deliver all the covenant promises of God, and John wastes no time in telling them: “After me comes he who is mightier than I, the strap of whose sandals I am not worthy to stoop down and untie. I have baptized you with water, but he will baptize you with the Holy Spirit.” And that’s the gospel!