July 23: The Seventh Sunday after Pentecost 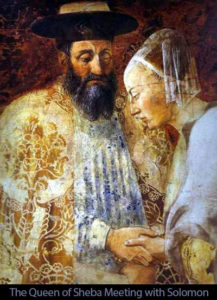 If you see in a province the oppression of the poor and the violation of justice and righteousness, do not be amazed at the matter, for the high official is watched by a higher, and there are yet higher ones over them. But this is gain for a land in every way: a king committed to cultivated fields.

He who loves money will not be satisfied with money, nor he who loves wealth with his income; this also is a vapor.

When goods increase, they increase who eat them, and what advantage has their owner but to see them with his eyes?

Sweet is the sleep of a laborer, whether he eats little or much, but the full stomach of the rich will not let him sleep.

There is a grievous evil that I have seen under the sun: riches were kept by their owner to his hurt, and those riches were lost in a bad venture. And he is father of a son, but he has nothing in his hand. As he came from his mother’s womb he shall go again, naked as he came, and shall take nothing for his toil that he may carry away in his hand. This also is a grievous evil: just as he came, so shall he go, and what gain is there to him who toils for the wind? Moreover, all his days he eats in darkness in much vexation and sickness and anger.

Behold, what I have seen to be good and fitting is to eat and drink and find enjoyment in all the good labor with which one toils under the sun the few days of his life that God has given him, for this is his lot. Everyone also to whom God has given wealth and possessions and power to enjoy them, and to accept his lot and rejoice in his toil–this is the gift of God. For he will not much remember the days of his life because God keeps him occupied with joy in his heart. – Ecclesiastes 5:8-20

The first two verses have some especially difficult Hebrew to translate. The meaning is nonetheless obvious: there will always be someone with more money than you! Interesting too is Solomon’s wise counsel: “do not be amazed at the matter.” In other words, “Get over it.” There’s no need to be shocked or vexed; there will always be economic inequality in life under the sun. In this passage, “the poor” are the oppressed and the “high official” is the oppressor. The Hebrew suggests a better translation would be the “haughty and ambitious,” rather than the traditional “high official.” Each haughty and ambitious person has someone more haughty, ambitious, and rich above them!

The point is that people everywhere are trying to climb the social ladder. No matter how high you get, there are people who are still higher. This is the way it will always be under the sun, and don’t get stuck in this rat race. The wise recognize it, aren’t vexed by it, and avoid it.

He then tells us: “He who loves money will not be satisfied with money, nor he who loves wealth with his income; this also is a vapor.” Put a little differently: if you love money you will never have enough. It’s like saltwater: the more you drink, the thirstier you become. It doesn’t matter how much money a person makes, it never feels like enough. I knew a man who made half-a-million dollars a year, and he complained about being strapped for money (actually, he blamed his wife!). Solomon says that living this way is vaporous.

There are at least 5 more points in the passage, and they all lead to the same conclusion: “Behold, what I have seen to be good and fitting is to eat and drink and find enjoyment in all the good labor with which one toils under the sun the few days of his life that God has given him, for this is his lot.” Preacher Solomon has reached this conclusion several times before in the book, but here we are assured that God is the one who gives wealth, and what you get is your lot. The wise find enjoyment in it and avoid the vaporous pursuit of more than his or her lot from God.

When we look at the life of Jesus in the gospels, we see there a man who was utterly content with His lot. He knew that He had exactly what God had given Him. He is never worried, and counsels His disciples not to worry about it either (with a mention of Solomon!): “Therefore I tell you, do not be anxious about your life, what you will eat or what you will drink, nor about your body, what you will put on. Is not life more than food, and the body more than clothing? Look at the birds of the air: they neither sow nor reap nor gather into barns, and yet your heavenly Father feeds them. Are you not of more value than they? And which of you by being anxious can add a single hour to his span of life? And why are you anxious about clothing? Consider the lilies of the field, how they grow: they neither toil nor spin, yet I tell you, even Solomon in all his glory was not arrayed like one of these.”