April 2: The Fifth Sunday in Lent 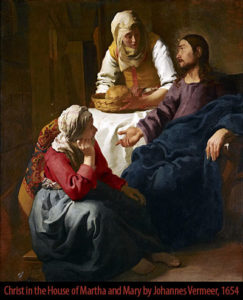 Now a certain man was ill, Lazarus of Bethany, the village of Mary and her sister Martha. It was Mary who anointed the Lord with ointment and wiped his feet with her hair, whose brother Lazarus was ill. So the sisters sent to him, saying, “Lord, he whom you love is ill.” But when Jesus heard it he said, “This illness does not lead to death. It is for the glory of God, so that the Son of God may be glorified through it.”

Now Jesus loved Martha and her sister and Lazarus. So, when he heard that Lazarus was ill, he stayed two days longer in the place where he was. Then after this he said to the disciples, “Let us go to Judea again.” The disciples said to him, “Rabbi, the Jews were just now seeking to stone you, and are you going there again?” Jesus answered, “Are there not twelve hours in the day? If anyone walks in the day, he does not stumble, because he sees the light of this world. But if anyone walks in the night, he stumbles, because the light is not in him.” After saying these things, he said to them, “Our friend Lazarus has fallen asleep, but I go to awaken him.” The disciples said to him, “Lord, if he has fallen asleep, he will recover.” Now Jesus had spoken of his death, but they thought that he meant taking rest in sleep. Then Jesus told them plainly, “Lazarus has died, and for your sake I am glad that I was not there, so that you may believe. But let us go to him.” So Thomas, called the Twin, said to his fellow disciples, “Let us also go, that we may die with him.”– John 11:1-16

The gospel reading from the Revised Common Lectionary for this Sunday (read in thousands of churches, literally all over the world) is the story of the raising of Lazarus, John 11:1-45. That’s a relatively long passage. Most commonly when it is preached, the focus is on roughly the last half of the passage with the dramatic conversation that culminates in Lazarus being raised from the dead. Preachers often read, but do not spend much time on, these opening 16 verses. This is not merely introductory material. John cared about and recorded all kinds of valuable things in them.

The Lord does not play games with us. Still, when you look at what Jesus says and does, it is clear that His ways are not our ways. After all, when Jesus finds out that Lazarus is ill, through a cry for help, He doesn’t offer help for two days. He offered no comfort or hope, but left Mary and Martha to do hospice care until Lazarus died right there in front of them. The disciples are not used to assisting and no preparations are made to go to Bethany. He speaks of death as sleep and even says that Lazarus died “and for your sake I am glad that I was not there.”

What went on for those two days while Jesus delayed going to Bethany? From the rest of the story, we learn that He was praying. Praying? Really? That’s it? It’s important to look at the larger story. Chapter 11 starts out with the disciples warning Jesus about Judea: “Rabbi, the Jews were just now seeking to stone you, and are you going there again?” The chapter ends with the High Priest declaring that one man must die for the people. Just before that, Jesus thanks the Father for hearing His prayer (vv.41-42). What prayer? The prayer prayed these two days while Lazarus was dying.

What was Jesus praying about? He was likely praying for Lazarus, Mary, and Martha, but apparently also praying for wisdom and guidance for His own movements and plans. That means everything with the Lazarus episode is strategic and exactly what it needed to be. The raising of Lazarus is the principal reason the Temple authorities would want to get Jesus out of the picture. It is the most powerful sign Jesus has performed, but that moves everything much more intentionally toward the climactic events.

These two days of waiting were vital. Yes, this story is about Lazarus, Mary, and Martha, but even more about Jesus. He is obedient and relying on His Father for even the timing of His movements. All of Jesus’ actions are symbolic pictures of His work. We see here that waiting on the Lord leads to resurrection and life. Death will not win, and unexpected endings are not a game but the glorious way in which God works. That’s the gospel.