December 6: The Second Sunday of Advent 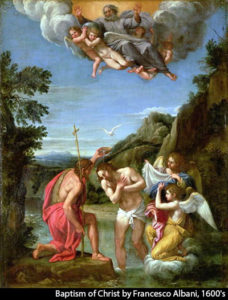 In those days Jesus came from Nazareth of Galilee and was baptized by John in the Jordan. And when he came up out of the water, immediately he saw the heavens being torn open and the Spirit descending on him like a dove. And a voice came from heaven, “You are my beloved Son; with you I am well pleased.”

The Spirit immediately drove him out into the wilderness. And he was in the wilderness forty days, being tempted by Satan. And he was with the wild animals, and the angels were ministering to him. – Mark 1:9-12

There are just four little verses here, but so much is taking place! For one, we see that John the Baptizer is the new Elijah. Not only does he dress like Elijah, but God’s similar action at the Jordan River is impressive. Elijah and Elisha cross the Jordan on dry ground and that’s when Elijah asks Elisha what he could do for him. Elisha asks for a “double portion” of Elijah’s spirit. So there, on the western side of the Jordan, Elisha received his request as Elijah ascended to heaven and his “mantle” fell and struck the Jordan, which divided the waters and Elisha crossed over to Jericho and healed the city’s cursed water.

Moses also ascended on the west side of the Jordan (“opposite Jericho,” Deut. 34:1). Joshua was his successor who also received the Spirit to continue God’s work. Joshua crossed the Jordan on dry ground and went to Jericho to wage war and destroy it.

This demonstrates that John the Baptizer is the new Moses and Jesus is the new (and better!) Joshua; John is the new Elijah and Jesus is the new (and better!) Elisha. There was passing through the waters of the Jordan into places away from the Promised Land that battle could be fought. John baptizes Jesus who receives the Spirit and goes away to the wilderness to wage war against principalities and powers in high places, the spiritual forces of wickedness—and wins!

If we think for a minute about Jesus’ baptism, even more remarkable things are revealed. Mark says that Jesus saw the heavens being torn open and the Spirit descending on him like a dove. We’re used to hearing the Spirit described in such terms, but that would have been a real shocker to the original audience. The only place the Spirit of God was likened to a dove was in the Targum. That’s the Aramaic version of the Law and Prophets. Hebrew was more for study, so the Targum was in the everyday language of Jesus’ time. The creation account of Genesis 1:2 says the Spirit of God was hovering over the face of the waters, and God said, ‘Let there be light.’ The word translated in the ESV “hovering” also means “fluttering.” To capture the image, the rabbis who compiled the Targum said, “And the Spirit of God fluttered above the face of the waters like a dove, and God said: ‘Let there be light.’”

Here we have the same three parties present at Jesus’ baptism as in the creation account: God the Father, God’s Spirit, and God’s Word, through which He creates. Not only that, but the Spirit was over water! In the same way that creation was the work of the Triune God, Mark is saying that the redemption of the world (i.e., the rescue and renewal of all things) has begun with the arrival of King Jesus.

God the Father, God the Son, and God the Holy Spirit above the waters speaks. And a voice came from heaven, “You are my beloved Son; with you I am well pleased.” Think of it: Jesus is baptized and he is enveloped with the best thing anyone could ever hear from their father: “I’m delighted with you!” There’s so much more here I’d like to say, but let us be clear that the heart of all Christianity is summarized here. When the living God beholds every person baptized into Christ Jesus, He looks at each one and says, “You are my dear child: I’m delighted with you.” And that’s the gospel!