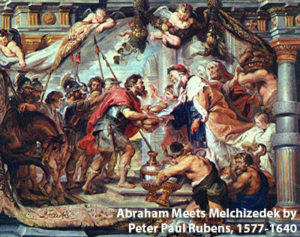 Now the point in what we are saying is this: we have such a high priest, one who is seated at the right hand of the throne of the Majesty in heaven, a minister in the holy places, in the true tent that the Lord set up, not man. For every high priest is appointed to offer gifts and sacrifices; thus it is necessary for this priest also to have something to offer. Now if he were on earth, he would not be a priest at all, since there are priests who offer gifts according to the law. They serve a copy and shadow of the heavenly things. For when Moses was about to erect the tent, he was instructed by God, saying, “See that you make everything according to the pattern that was shown you on the mountain.” But as it is, Christ has obtained a ministry that is as much more excellent than the old as the covenant he mediates is better, since it is enacted on better promises. –Hebrews 8:1-6

Growing up in the 1980’s, I enjoyed playing arcade video games. These days such games are played at home, but back then only places like pizza parlors and arcades had them. You put in a quarter and then you could play games like Pac-Man, Missile Command, Galaga, Donkey Kong, and Centipede. When I was about 14, a game was produced where the player climbed in and sat down behind a steering wheel. It had accelerator, brake, and clutch pedals along with a stick shift. On the screen was a racetrack complete with other cars and obstacles. I loved this game and spent far too many quarters on it.

That same year my dad got a truck with manual transmission. I had driven an automatic many times (rural roads in Pontotoc County!), and I thought that driving this manual truck would be a piece of cake because, after all, I was a master at that racecar video game. I even bragged that “I was already good at a stick.” You can probably guess that when I did start driving Dad’s truck, it was at best embarrassing. I had foolishly confused the copy of the thing with the thing itself. They just weren’t much alike at all in reality!

The passage above shows us that the original audience and all who read it must distinguish between the copy and the reality. They must celebrate the real thing and let go of the copy. The temple in Jerusalem was likely still standing when they read this initially. It was a focus of devotion, a place of pilgrimage, and in many minds the very house of God. But those priests serving there were only copies, and the holy of holies was only a copy, and the place, Jerusalem, itself was only a copy.

Jesus Christ has obtained a ministry that is as much more excellent than the old as the covenant he mediates is better. How do we know that? Why must we hold fast to that and never let go? Because his ministry is enacted on better promises. And that’s the gospel.